The largest multifunctional complex in Siberia

Originally, the building should be built on the site of the old palace, built in 1975, but the area was not sufficient to turn all the ideas into reality. The total area of the new building is approximately 45.000 square meters. The building houses under one roof many venues: big theatre hall and concert hall, multifunctional hall, banquet hall, jazz club, dance halls, video studios and audio studios. The building can host guest performances of the big opera and ballet houses, as well as rock bands and symphonic orchestra. The lobbies can be used for meetings, exhibitions and small presentations.

The exhibition area is situated in the lobby on the 3rd floor and is filled with a lot of light and air, which makes it ideal place for art show openings and exhibitions

Two big and several small dancing rooms, three singing rooms, studio theatre and other rooms for rehearsals of voice bands and dancing groups are available in Palace of Arts.

Two sound-recording studios enable synchronous record of different music groups. One video studio with professional equipment is also set up in the building.

The big theatre and concert hall is the centrepiece of Palace of Arts „Neftyanik“. It can accommodate up to 1.200 people and is one of the most state-of-the-art venues in Russia.

The Client asked Kunkel Consulting International GmbH to optimize the originally prepared theatre equipment concept to ensure better technical data, functionality and realization of stage machinery, stage lighting and AV within the budget. The concept has been optimized by KCI: the distance between fly bars was reduced, payload and speed of fly bars was increased, connecting stairs between galleries provided.

In accordance with the revised concept, the hall was equipped with the state-of-the-art technology:

The original name of Art-Cafe was Jazz-Club, but before the opening, its name was changed. This venue with 60 seats has a stage and is equipped to organize all types of music events.

Neftyanik has also a multifunctional hall for 270 seats with a separate lobby. The stage of this hall is flexible and can be installed in various parts of the hall. This stage flexibility was considered in the design of the overstage machinery.

The Multifunctional hall is equipped with the following machinery:

The banquet hall with 300 seats has its own stage. The ceiling has special supporting structures, such as oval truss and bridge, provided for suspension of lighting fixtures.

Additionally to these supporting structures, the banquet hall is equipped with the following stage machinery:

All halls of the Palace have enough options to fix the equipment: machinery structures, for example, lighting bridges, lighting ladders in the big hall; special designed truss systems in the small halls.

The connection boxes are distributed throughout the house and provide control signals and power for lighting fixtures.

The sound system enables sound reproduction from each place of stage and auditorium. The PA-system is based on the digital audio network with routing matrix. The mixing consoles are installed in each hall.

The Palace of Arts is equipped with complete tailor-made stage management system with control desks for each hall, communication stations, cue lights, paging and monitor system.

Video cameras have been installed in the big hall to ensure live-broadcasting.

All the auxiliary rooms (unloading area, side stages, scenery storage) are equipped with ancillary chain hoists to enable quick reloading or assembling of stage sets for events.

After opening, well-known Russian theatres visit Surgut with tour performances and the audience enjoy the versatile performance program of the Palace, which includes shows, plays, music concerts and many other cultural events. 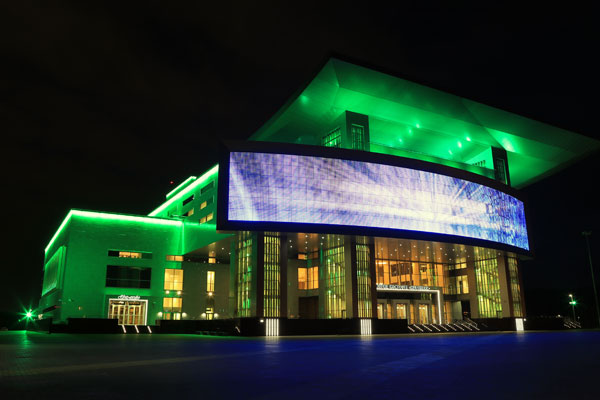 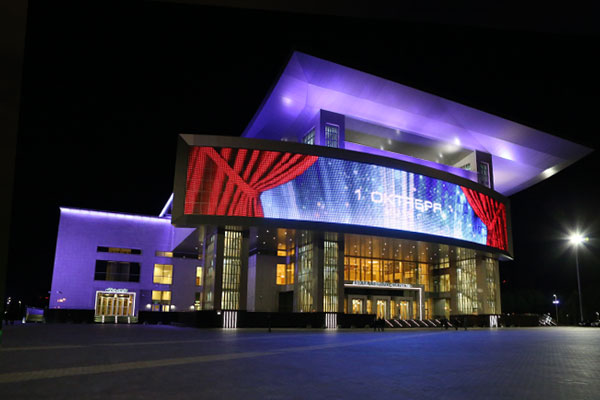 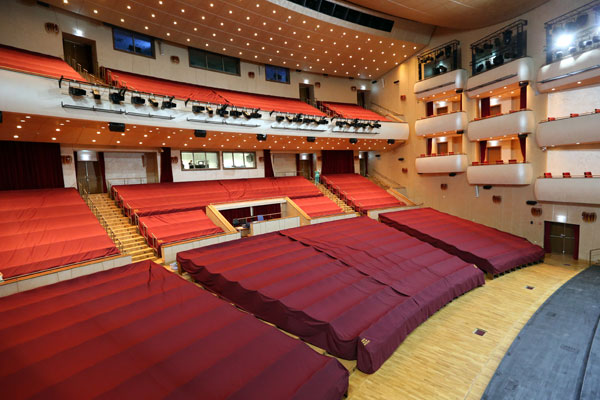 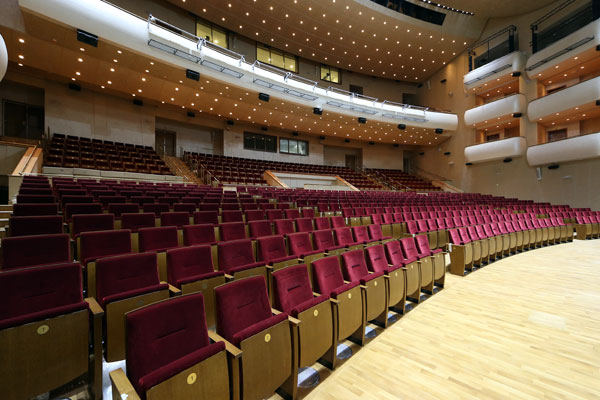 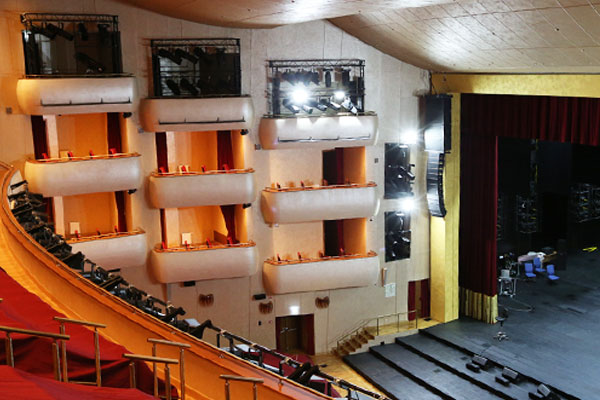 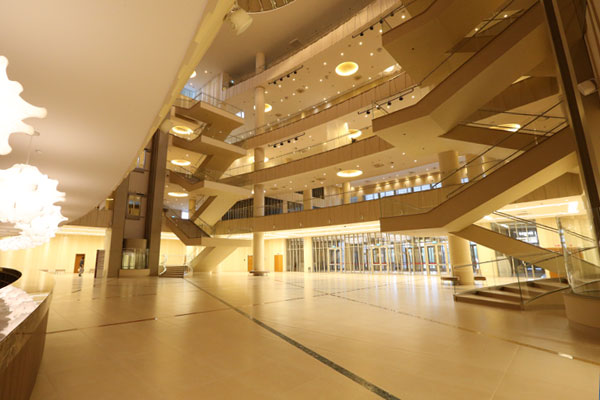 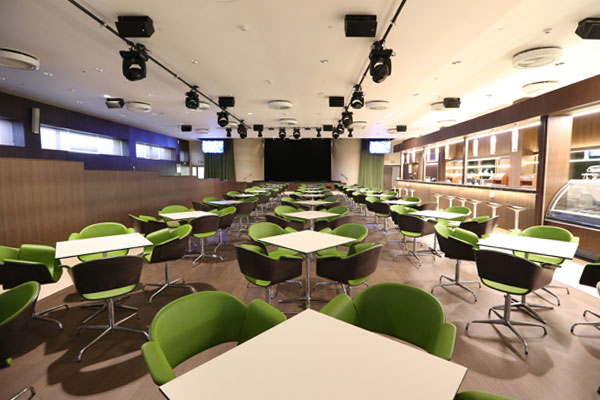 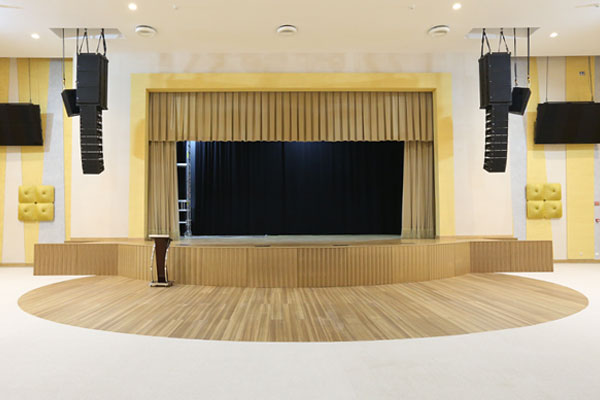 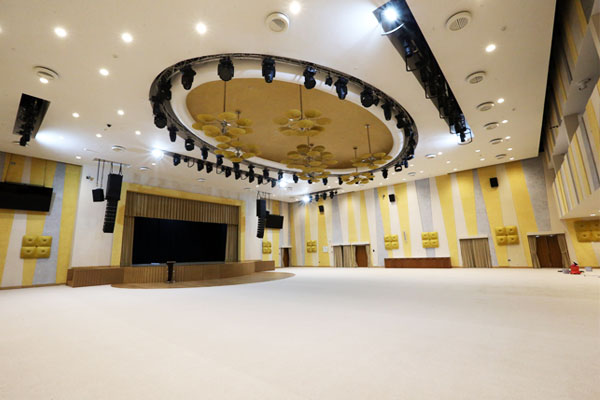 The official opening ceremony of Palace of Arts „Neftyanik“ took place on October 1, 2016, in Surgut. The construction of this unique multifunctional building lasted over 4 years. The investor was OAO Surgutneftegas one of the largest oil and gas company with headquarters in Surgut, Siberia. 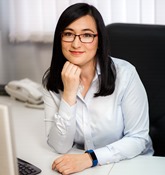 Each event venue is unique. The facility concept influences not only stage technology, but also architectural solutions. Therefore we advise not only operators and users, but also architects on the needed room areas, heights, sizes and functional relationships. This helps to ensure that all kinds of events can be brought on stage without restrictions.

Our focus lies on

and thereto related areas, like rehearsal rooms, workshops, storage systems for scenery and technical equipment, studios and the complete infrastructure.